We consider documentation and recording of oral information and stories an important aspect of our work. Over the years Vanastree has produced—in English and Kannada—booklets, reports and other materials on forest home gardens, ethnoculinary cuisine, and community eco-enterprises. Vernacular publications have ensured that the written word has retained features of the local dialect and special Malnad phrases, rather than conform to standard Kannada. 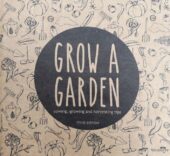 A handy little graphic guide for the amateur and professional gardener in rural and urban areas. 3rd Edition 2018

LADOOS AND PICKLES (Kannada with English recipe list)
Heirloom Recipes from the Malnad. 2020

Nelli is a collection of Amla (Indian Gooseberry) recipes from the Malnad and other regions of India, along with relevant information including nelli folklore. It is the first of a series-in-progress on the ethnoculinary traditions of the Malnad.

English version of the above listed publication. 2010

Kannada version of the above listed publication. 2010

Gardens of Growth is a handy info-guide to the organic, open pollinated seeds, produce and value added products grown and created by women gardeners, farmers and craftspersons around Sirsi. It is a celebration of community, culture and the spirit of the collective. 2015

Voices for Green Choices is a guide to the toxic effects of common household products we use and the safe alternatives to them. It covers home cleaning, cosmetics and personal care, garden, children and pet care. The booklet contains several DIY recipes as well. This is a draft and we welcome comments. 2015

Deforestation in Uttara Kannada is a report examining the reasons why the district is being decimated of its forests. The work largely draws upon the advocacy work done by the local agency Parisara Samrakshana Kendra. 2006

This student research report is a baseline study that looks at how plant species diversity, richness and composition in forest home gardens are distributed across three distinct spatial components in the Malnad from the edge of the ghats to the coast. English. 2013

French version of the above listed report. 2013

This student led baseline survey looks at faunal diversity in forest home gardens around Sirsi. Butterflies, odonates, amphibians, reptiles, birds and mammals were documented. Although no conclusive biodiversity index can be established, it is an important first step in looking at home gardens as preserves of wildlife. 2014

An article in Teacher Plus magazine on the untold benefits and joys of creating a food garden with school children. Green thumb rules and resources are also listed. 2011

The Custodian of Her Forest Garden. The Hindu. July 2016

This article is the story of Bhanumathi — a woman in her 70s, whose home is on a forest farm in the Western Ghats region of Karnataka. An expert gardener, cook and craftsperson, she conserves traditional seeds of the area. 2016